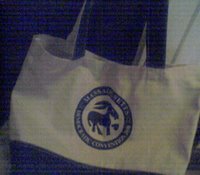 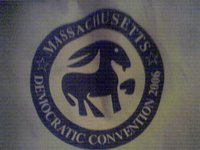 I know this doesn’t make sense, but for some reason I suddenly became obsessed with the idea of receiving a free tote bag at the Democratic Convention. On Friday night, I even had a dream about a tote bag. Anyway, as you can see by the pictures, I got one! C-Span to the rescue! Actually, I was not so alone in my tote obsession, because people were just losing their minds over these totes. After the roll call, when all the delegates were officially accounted for, two dozen delegates were contested. This held up the start of the first ballot vote. It was about 12:30 and we were told it would take about forty-five minutes to resolve the contest. After the loud collective groan, everyone pretty much decided to break for lunch.

After calling my mom to give her an official convention update, I stood in the long line at Papa Gino’s waiting for my individual cheese pizza. After a few minutes, I started seeing all these people rushing by with wide grins on their faces and armfuls of tote bags. I was so excited! A tote bag! I’m going to get my convention tote bag! I asked the woman behind me if she would hold my place in line, so I could get one. She agreed - if I would get her a tote bag too. I grabbed about six, which was a small amount compared to most people. One woman must have had about forty. When she went up to order her pizza, she had this big pile next to her. Someone tried to grab one and she angrily yelled that they were all hers. After I got my pizza, they announced that the contest had been resolved and I quickly went back to my seat.

Overall, this was a great experience. I met and shook hands with Deval Patrick and his wife, Kitty Dukakis, George McGovern, and some of my local representatives. The voting process surprised me. It wasn’t secret. We shouted our choices to our local teller, who was surrounded by a crowd of people who were making sure everything was taken down correctly. I felt proud being there and giving my votes. I so strongly feel that we all really need to participate in the political process if we want to make changes. After all, this is what a democracy is about. I really believe that each one of us can make a difference. Hopefully I’ll have some convention pictures in a few days. Stay tuned!
Email Post
Labels: convention delegate Deval Patrick tote bag

something from me said…
Thank you Anali,
It won't always be so steamy. I hope you will keep reading.
I will link to you too.

something from me said…
Anali,
What will you do with the other 5 bags?
Do you like the words I used for your link? I can change it if you like.
I liked the words you used. Thanks.
I like the look of your blog too. I need to learn more about visual presentation.
How many visitors do you get each day?
Take care,
SM
6/6/06, 4:22 AM

Enyasi said…
The tote is definitely a badge of honor.Wear it proud!!