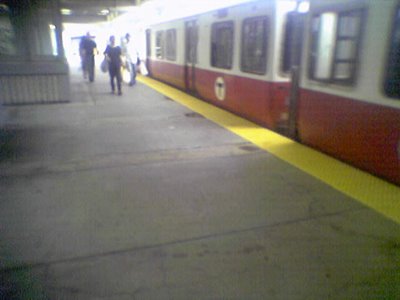 This subway story is from about a year ago, but it has stayed with me as one of those unforgettable encounters. I read an article about the recent study showing how lonely we are in this country. I believe it. People are looking for others to confide in without judgement or consequences. The number of strangers who come up to me and tell me their innermost feelings astounds me. Granted, if they seem harmless enough and I have time, I will talk to them for a bit. Especially on the T. I'm sort of a captive audience and actually do care about my fellow man.

I was on my way to work, sitting on the platform at Wollaston Station waiting for the inbound train. A somewhat attractive professional looking black man, about my age, walked past me. He looked rather preoccupied and not at all happy. As he was approaching me, I looked for some acknowledgement or eye contact and was going to say "hi," but he didn't appear to notice me. "Fine, whatever" was what I was thinking. "Great way to start my day. I will surely be single forever." He went downstairs and I thought he was leaving the station.

As usual, the Red Line was slow, so I continued waiting for the train and calmed down. Some days, I have certain goals in mind, trying to be more patient, eating more vegetables - all different things. That day in particular, I was trying to be less judgemental. About five minutes later, he walked past me again. Then he walked back and came up to me and said, "Oh good. You're still here." I was thinking,"Huh?" Apparently, he had noticed me. He said, "Since you're still here, I didn't miss the train."

I don't remember how he brought it up, but he started telling me that he was supposed to have been getting married that week. He was very upset and was trying to be strong. He had broken off the engagement, because he found out that his fiancée had been cheating on him. He started telling me all about their story and how things came to pass. I don't remember all the details, but he basically knew that she was not the one for him. He knew there was somebody out there who was better. He looked so sad, and I felt really bad for him. Right before he got off the train, he thanked me for listening. He said that he just needed to talk to someone who wouldn't judge him. He said that I was his angel and thanked me again. I was walking on air all day.
Email Post
Labels: Red Line Subway Stories

something from me said…
Well Angel,
Did you ever see the guy again? Or will you be single forever?
Nice story.
I have encounters or near encounters like that all the time, and often think I have missed an opportunity.

Boxing day is the day after Christmas day.

Lisa Johnson said…
Steve - No. Actually, I never saw him again, but that's okay. He certainly had some unresolved issues and I would have been way too much of a rebound. I still hope I won't be single forever!

So, why is it called Boxing Day? People have boxing matches on the day after Christmas, because they were too overwhelmed with love and kindness the day before?? : ) Or does it have something to do with all the boxes people have to throw away after getting gifts on Christmas??
6/29/06, 7:20 AM

Enyasi said…
I love this story!!! Amazing how people can connect and how comforting listening can be for both parties. Still, a little voice (I am sure it is my mother's) keeps saying, "Did you get his number?" ;-)
7/1/06, 9:56 AM