Not Just A Fluff Piece 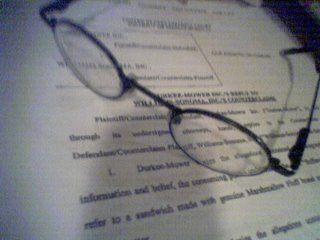 From my previous posts, you can see my sudden fascination with Marshmallow Fluff. But this isn't just a fluff piece. The story has gone national. It's a federal case. Well, not quite the same story, but it's about Fluff all right.

My sweet tooth has lead me to believe that inquiring minds may want to know more, so I read some documents from Boston's U.S. District Court. In November 2005, Durkee-Mower, the maker of Marshmallow Fluff sued Williams-Sonoma, which by the way is one of my favorite stores.

According to the Court, the litigation is ongoing. I haven't checked the stores, but I could not find "Fluffernutter" on the website. I'm assuming they are no longer selling it. That would be a wise decision.
Email Post
Labels: court Fluffernutter Marshmallow Fluff trademark

something from me said…
So much fluff.
I am glad that blogging makes you happy.
I enjoy it too.
What I write about happened several years ago. It is as fresh in my mind now as it was then.
One has to look forward though, doesn't one.
Steve
6/27/06, 8:25 AM

Enyasi said…
Power to the Fluffernutters... Have been off line a bit.. But thanks for all the great Fluff info... I spent many summers at my Great Aunt's house. On one end was the Fluff factory, the other Wonderbread. I was practically raised on the stuff! Fluff has made the news all the way in Seattle. Just goes to show you, You can't mess with Fluff!
6/28/06, 11:02 PM

Lisa Johnson said…
Enyasi - You're right that you can't mess with the Fluff. I read that Senator Barrios is no longer opposing Fluffernutters. Too much controversy!