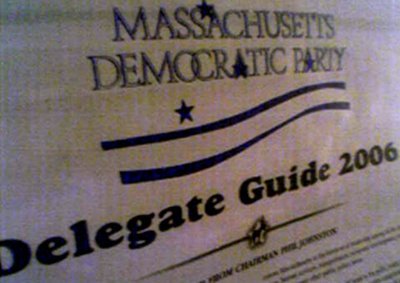 I must say that I’m starting to get a little excited. It will be my first time tomorrow night in Worcester. Get your minds out of the gutter people! I’m going to be voting as a Delegate in the Massachusetts Democratic State Convention. We are almost down to the wire. I’ve been swamped with mail from the candidates and I’m getting tons of phone calls from them too. Do they really think they are going to convince people to vote for them by making annoying phone calls. It’s the issues people!!

The hottest race is for Governor. We’ve had Republican Governors for about sixteen years now. It’s definitely time for a change. Deval Patrick, Tom Reilly, and Chris Gabrieli are all trying to get 15% of the delegates votes, so they can make it onto the ballot for the primaries in September. I’m voting for Deval Patrick and really hope that he will be the only one who gets the 15%. If two or three of them make it onto the ballot, Democrats will probably split the vote. Then there will be little chance to beat the only Republican candidate, our current Lieutenant Governor, Kerry Healey. Well, it’s getting late and I need to read this brochure, so I can understand all the rules. I’ll report back on how it all went down.
Email Post
Labels: convention delegate Deval Patrick Governor Massachusetts Worcester

wheresmymind said…
I think that Mitt has burned a lot of bridges around here...for some reason I can't see the Republicans coming out on top.
6/2/06, 8:53 AM