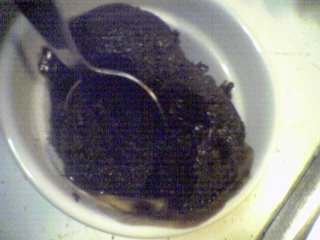 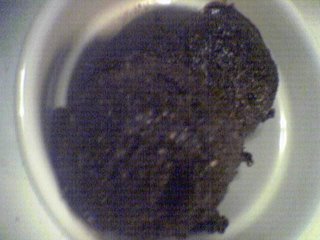 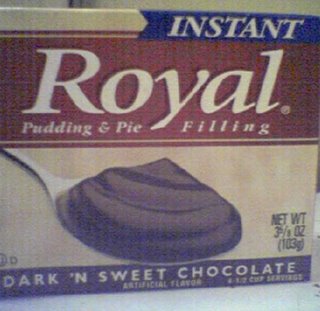 I just made chocolate sorbet by accident. Well, maybe it’s not really sorbet. I think sorbet is not supposed to have milk in it, so this is something else. Let me tell you how it happened.

Last night I was craving chocolate. My mom gave me some packages of instant chocolate pudding months ago and I never used it. I was rummaging through my kitchen cabinets yesterday and found them. I decided to double the recipe, which I know is usually a bad idea, but I was still tired from the convention and in some sort of chocolate-deprivation haze.

I put 4 cups of cold rice milk in a bowl and added two packages of the pudding. Then I used an electric mixer on high for 2 minutes and put in the freezer hoping it would solidify faster. After about a half an hour, it was still liquid, though quite tasty. I admit to slurping down several spoonfuls. I put the container in the fridge overnight and thought I would have some chocolate pudding to take with me for a nice snack at work.

Then this morning, which I guess is yesterday at this point, I opened the container and it was still liquid. Hey, yesterday was 6/6/06, maybe Beelzebub caused the problem! Anyway, no pudding for me, so I stuck it in the freezer just to solidify it. Tonight, I tried it and this frozen pudding is pure creamy chocolate Heaven! I’m going to make this mistake on purpose next time!
Email Post
Labels: chocolate cooking food

something from me said…
Hey Anali,
Sounds like a good mistake. You should publish a recipe book, 'Accidental cooking'.

Thanks again for all your comments, they are appreciated.

The next few posts will take a few dramatic turns, and hopefully a few surprises.

wheresmymind said…
Well..if that was the case that Beelzebub caused the problem, that's the most exciting thing I heard happen in relation to 6/6/06!! lol
6/7/06, 8:44 AM