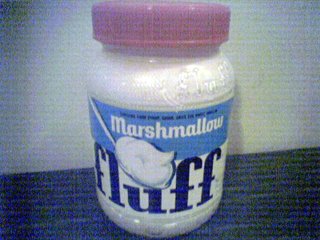 Our state legislators are battling it out over Fluff. Literally - Marshmallow Fluff. According to a news article State Senator Jarrett Barrios was not at all happy to learn that his son's school served Fluffernutter sandwiches, Marshmallow Fluff and peanut butter, as an alternative to the meal everyday. Senator Barrios stated that he would seek to limit the Fluff to no more than once a week.

As soon as word got out about the impending Fluff limit, State Representative Kathi-Anne Reinstein decided she wants to have her Fluff and eat it too. According to her office, she plans to file legislation making the Fluffernutter the official sandwich of Massachusetts. In another news article, Representative Reinstein states that she will "fight to the death for Fluff." Not to be deemed anti-Fluff, an Aide to the Senator responded by stating that "He loves Fluff as much as the next legislator[.]"

You can bet that I will be following this important Fluff legislation and keeping you updated as the news happens.

something from me said…
Tell me Anali,

Do you like fluff too?
Where are you in this great debate?

I must admit that I'm not really a big fan of the Fluff. When I was a kid, I went through a phase where I really loved Fluffernutter sandwhiches, but overall I developed an aversion to marshmallows over the years. When I was pretty young, my parents took my brother, two of my cousins and I to the beach. My cousins had a gigantic bag of really large multi-colored marshmallows. My parents told us not to eat all of them. So of course we did and made ourselves sick. I think outside of s'mores, I reallly haven't eaten marshmallows since. But, I bought the Fluff just for the picture. Now it is sitting in my cabinet - mocking me and awaiting my next move! ; )
6/22/06, 8:40 AM